About the Directors Guild of Japan 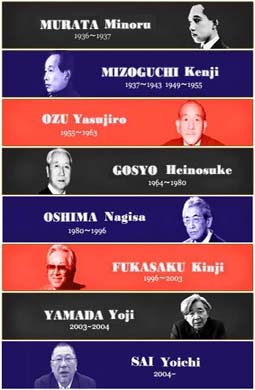 The past and present chairman
of the board of directors

Ever since its inception in 1936, the Director’s Guild of Japan has promoted for growth in the field of cinema and motion pictures, and worked to raise the social status of directors. Various efforts are being made to establish and protect copyrights of directors to foster creativity and artistic freedom.

Through this website, we would like to raise our awareness to as many people as possible, and open the door to a new era with everyone who is passionate about cinema and motion pictures.

The Directors Guild endeavors to establish and protect freedom of expression, to improve the status of film directors, and to enhance various rights of its members.

“Copyrights of films belong to film production companies” after the copyright law was reformed in 1971. Therefore, directors currently do not possess copyrights.

However, “moral rights” (right to preserve integrity, right to determine the indication of author’s name, and right to make the work public) are given to creators.

In other words, directors have no “financial rights”, but possess “moral rights” as creators.

The Director’s Guild has called for reform of the copyright law through activism, initially by collective agreements with film production companies to expand and protect rights of directors. In the recent years, we are trying to reform the law to allow directors to be given copyrights, then transfer copyrights to producers in the form of contracts, by advocating to the nonpartisan Art and Culture Promotion Committee of the National Diet.

The Directors Guild endeavors to establish and protect freedom of expression, to improve the status of film directors, and to enhance various rights of its members. 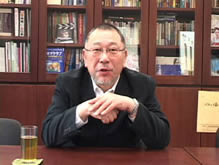 Some of you may be wondering just what the DGJ is. Simply stated, it is Japan’s only cooperative for film directors (including those working with all genres of moving images). These directors work under conditions that are very different from the golden age of Japanese film, when directors were employees of large film companies or under contract to major film studios. That era has ended. Nowadays, the films we normally see in theaters, the dramas broadcast on TV, as well as anime, documentaries, commercials, and all of the new forms of Net media-these modes of expression as numerous as the stars in the sky-are created primarily by directors who work independently, as self-employed persons.

The Directors Guild has a long history. Its establishment was announced on March 1, 1936, but older directors often spoke, sometimes in hushed tones and sometimes proudly, of the events that took place several days earlier, during the night of February 25. Leading figures of Japanese film from both Tokyo and Kyoto gathered that evening at an inn in the Kanda district of Tokyo. After a night of heated discussion-in the early hours of February 26-they finally agreed unanimously to establish the Directors Guild of Japan.

Those with an interest in Japanese history will already have realized this, but February 26, 1936 was a significant turning point in the history of prewar Japan. An attempted coup d’état by young army officers that began in the dead of the night, the February 26th Incident was only quelled after several days by the declaration of martial law.

What a curious twist of fate! Our guild was launched at the very moment when those who made their living directing films were made stunningly aware of the times they were living in.

On February 26, 2016, the Directors Guild of Japan will mark its 80th anniversary.

After surviving a difficult period of regulation and consolidation before and during World War II, the Guild was re-established after the war and has survived into the present.

It is now 34 years since I first joined the DGJ. The years have passed quickly.

A film director pulls together a large number of crew and cast members, while maintaining a commitment to his or her expressive vision. It is because the director is at the pinnacle of numerous collective efforts that we call him or her “the director.” Providing the axis of filmic expression means to explore and know, by our own volition, our existence as natural persons. Stating this in terms of the principles of the DGJ, this means obtaining and protecting the director’s copyright in films, as well as freedom of expression.

It is abundantly clear that these rights are fundamental to the profession of the film director, who specializes in conveying thoughts and ideas-the accumulation of beliefs and emotions-to others, i.e., the film audience.

However, Japanese copyright law, while recognizing film directors as authors but does not grant them copyright.

“So what the heck is the DGJ doing about it?” I can almost hear people asking. We are making concerted efforts to bring all of the stakeholders together at the same table to carry on serious discussion of the issues involved.

To respond to structural changes in the film world and the steady appearance of new media, we must go beyond the bipolar structure of producers vs. directors. We subscribe to a notion of countervailing strengths that will foster the development and promotion of film by mutually pursuing our interests with fairness.

Marking our 80th anniversary will be a landmark, representing the unbound progress of directors as the standard bearers of the film and video image.

We ask for your continued support and guidance in the years to come.